Removes Chloramine, Chlorine and more!
Conveniently provides 160,000 US gallons of quality water**
For 1 or 2 People

CRYSTAL QUEST® Utilizing the latest technologies in water industry, coupled with 30 years of manufacturing expertise, we provide you with the most effective, healthy, great-tasting water conveniently at the most affordable price. Our products are attractive, easy to install and use, and remove many contaminants from water*. 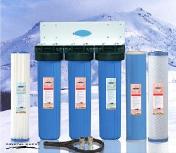 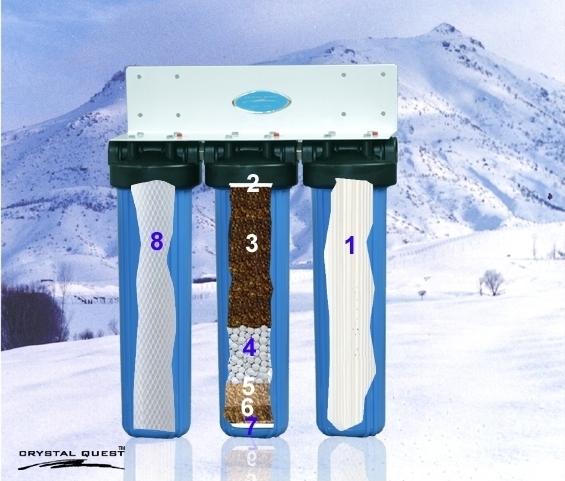 In stage 2, Water flows through one – micron filter pads (1 micron equals 1/25,000th of an inch), which remove suspended particles such as silt, sediment, cyst (Giardia, Cryptosporidium), sand, rust, dirt, and other un-dissolved matter.*

In stage 3, Water flows through granulated activated carbon (GAC). GAC is universally recognized and widely used as an effective adsorbent for a wide variety of organic contaminants, such as chlorine (99.9%), chemicals linked to cancer (THM’s, benzine) pesticides, herbicides, insecticides, volatile organic compounds (VOC’s), PCB’s, MTBE’s and hundreds of other chemical contaminants that may be present in water that create bad taste and odours.*

Carbon is extremely porous and provides a large surface area for contaminants to collect. Carbon-only filters must also use their capacity for chlorine removal, resulting in a shortened life. They also may use a bituminous coal carbon, which is good at removing chlorine, but not as effective at removing chemicals. We use a high-grade coconut shell carbon that is most effective at removing chemicals. Coconut shell carbon provides a significantly higher volume of micro-pores than either coal, wood or lignite based carbon. As a result, it is more effective than other carbon types in removing trihalomethanes (THM’s) and other chemicals from municipally supplied water. Since our REDOX media removes the chlorine before it reaches the carbon, the carbon capacity is not wasted on chlorine and is free to concentrate more effectively on organic contaminants.

In stage 5 and 6, water flows through a bed of media made of a special high-purity alloy blend of two dissimilar metals – copper and zinc (Eagle Redox Alloy® 6500, and Eagle Redox Alloy® 9500.) Eagle Redox Alloy® is a major advancement in water treatment technology that works on the electro-chemical and spontaneous-oxidation-reduction (REDOX) principles. Chlorine is instantaneously and almost inexhaustibly oxidized.

Tests on Eagle Redox Alloy®/GAC cartridge have shown 99+% chlorine removal past 20,000 gallons of water. In comparison, carbon cartridges of comparable volumes drop below 90% effectiveness after only 4,000 gallons.

Iron and hydrogen sulfide are oxidized into insoluble matter and attach to the surface of the media. Heavy metals such as lead, mercury, copper, nickel, chromium, cadmium, aluminum, and other dissolved metals are removed from the water by the electrochemical process. They are attracted to the surface of the media, much like a magnet. The media inhibits bacterial growth throughout the entire unit. In fact, it has been shown to be reduced up to 90%, eliminating the need for silver, which is commonly used in carbon-only filters (silver is considered a pesticide by the EPA and, as such, must be registered with them). Is copper or zinc added to the water in any significant amount? On 2.3 ppm chlorinated water, <0.05 mg/l copper and only 0.46 mg/l zinc were measured. The EPA aesthetic levels are 1.0 mg/l for copper and 5.0 mg/l for zinc. Both zinc and copper are essential minerals for good health – the FDA recommends a daily intake of 15 mg of zinc and 2 mg of copper.

In stage 7, Water flows through another one-micron filtration pad for further reduction of undesirable particles. The end result is a great reduction or the total elimination of a wide variety of contaminants.

* If present in your water.
** Varies with condition and amount of water consumption.